If you are a career changer, take a look into the paralegal profession. This career creates opportunity to utilize existing interests, talents, and expertise in combination with legal skill and knowledge.  If you are interested in the law, take a look at one student's story and her decision to gain her paralegal education and begin a new career.

Looking at Change as an Opportunity

In her second career, Kathleen Mudge was happily employed at a bank in New York State. She was working in the back room - overseeing loan payments, account maintenance and rule compliance. There was something new to learn every day and she had enjoyed the work for over 13 years. She would have contentedly stayed there until retirement but a series of events changed her world entirely and set her on the path to her third career.

The bank was bought out and her position was retrenched. She had two almost-grown daughters, one just about to graduate college, the other set to graduate high school. When the eldest announced that she wanted to earn a master's degree at the University of Houston at Clear Lake, Kathleen moved the whole family south. At first, she cast about for another banking job, but then she got the letter. It informed her that she might be eligible for the Veteran's Retraining Assistance Program.

In her first career, Kathleen had been in the air force, working in intelligence and stationed all over the United States and the world. Her last posting was as an analyst in Nebraska. When her marriage status changed, she took the opportunity to apply for an early out and left the job and the state. She wound up near family in upstate New York at the bank where her sister-in-law worked.

But now, her military experience was going to help pave the way to yet another career. Investigating the opportunity further, Kathleen uncovered a list of jobs that the government had designated as being in high demand.  Near the top of the list was one that appealed: paralegal.

Paralegals are in Demand

Kathleen liked the idea of being a paralegal; she had already had lots of experience with the law since much of her previous job had entailed analyzing current and new regulations and ensuring that the bank was complying with them. Plus she likes to think and learn new things; a paralegal career would guarantee that.

She investigated schools and chose the Center for Advanced Legal Studies because she could attend class in-person during the day. It wasn't that online learning, which the Center also offers, was intimidating, but Kathleen, who uses a computer when she has to, would much rather be in the classroom. And her experience at CALS has been rewarding. Various instructors have different ways of teaching, and Kathleen says that's okay:

"It allows for students to experience a range of styles that they'll come across in the real world," she says. The classes have been interesting and challenging, but Kathleen is a dedicated student. She is competing to match her daughter's 3.7 GPA.

Kathleen will graduate soon and will be highly employable. With her financial expertise and paralegal training, she hopes to work in a corporate environment, either oil and gas or banking. Will she stay in Houston? Probably not; she's a small-town girl and she's used to moving. She'll see her daughters settled and then decide. But wherever she lands, she will have options. She is a ready learner and a hard worker. And she'll have the skills to get in the door. She's looking forward to her third career and expects it will be her last.

For more information about our paralegal certificat or degree program contact us at info@paralegal.edu or call us at 800-446-6931 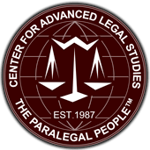